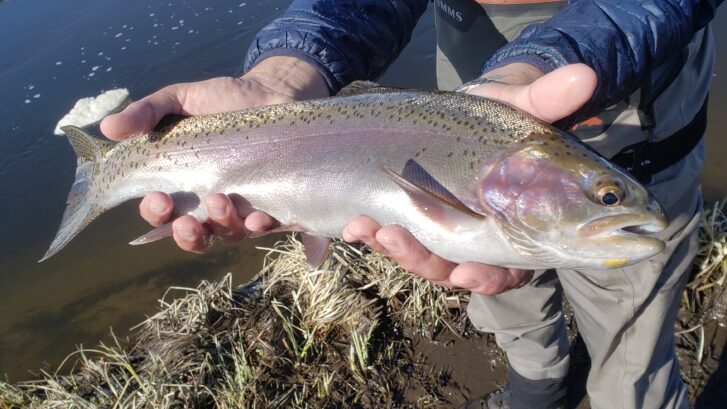 The Upper Owens river, just below Mammoth Lakes, is dumping into Crowley lake at an even flow rate of right around 120cfs. Hot Creek adds a few cubic feet/second while the East Portal adds 72cfs. These are pretty good flows for the Upper Owens and it has allowed a few large fish to make their way up the river and into our nets. At these flow rates we see the larger trout making their way up the river. These behemoths are not only found in the deeper and darker places but throughout the river system, they will also be in the riffles, foam lines, and some undercut banks. River access is still good as the dusting of snow Long Valley received did not last long. Smaller, average sized fish can be found here and there in the slower holding areas. Some dry fly action can be found with these sparky little resident fish on Baetis and Caddis patterns. But, for the big guys we have to go down under deep to place our offerings right in front of their large faces. Nymphs and streamers are the answer here. Attractors such as; Wolly Buggers, Zonkers, Pistol Petes, and any of your favorite streamer patterns have a chance here. Nymphs such as; SJ Worms of many varieties, PT and Prince nymphs, Peridons, large Midge patterns and similar ties will entice fish here. Don’t be afraid to experiment a little with any variations of these patterns. Now, we wait and see as to what nature will bring in the way of precipitation which drastically changes what happens this season on the Upper Owens River. 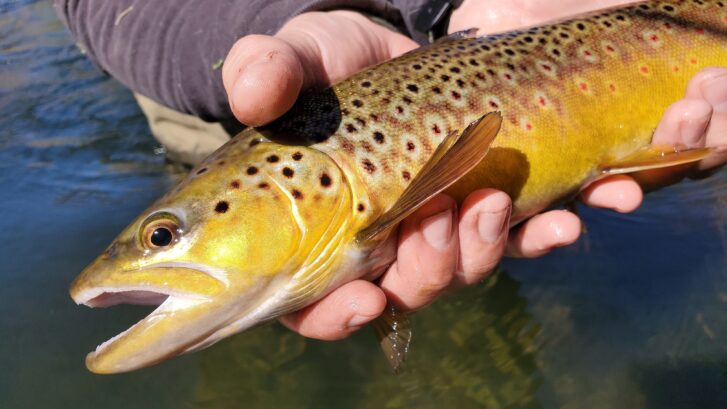 The jewel of Bishop, the Lower Owens River, is now flowing at a prefect flow of right around 150cfs at the time of this report. The LADWP held up to their word of the higher flows until just recently. At this current flow rate the Lower Owens is absolutely perfect for both wading and floating. Hatches can be seen generally around mid-morning throughout the river system. Fish are just now starting to look up and give us fly fisherman some long awaited Lower Owens River top water action! An unusual amount of Rainbow Trout can be found in the upper sections of the river while down below is almost pure wild Brown Trout. The entire river holds fish and one must only read the water to find where to present their hand tied offerings. We are getting some much needed rain with snow in the high country as we speak. Stay tuned for more reports as an exciting new season begins! 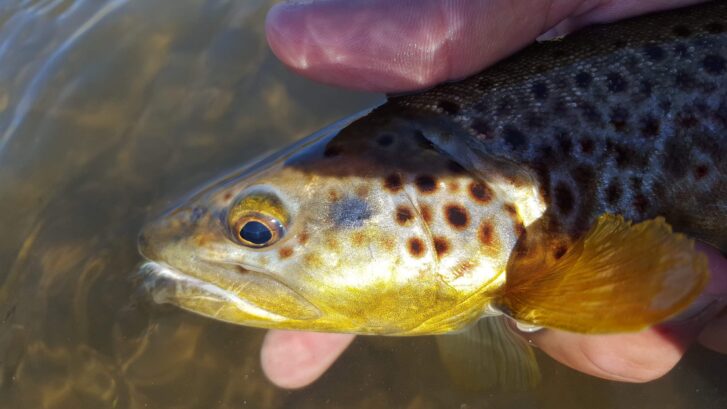 Flushing flows are holding the Lower Owens River at around 370cfs at the time of this report. Originally scheduled until the 13th we surely should see them drop very soon back to around 200cfs levels to start. After the first few days of the flush the water cleared up enough to drop a fly or two into her clear, and fast flowing waters. Hatches are out in the morning with random attacks on the surface here and there. The fly angler who seeks only surface activity can hunt out a fish to two that is steadily slurping insects off the top. The ultra warm temperatures this summer made the riverside vegetation flourish this year, once in the water you find yourself in a trout anglers paradise. The trend of larger fish continues on as some amazing hookups have been thrilling anglers with the thrill of a large wild trout pulling in the strong current. The river is bug rich and hatches come off thick. Turning over rocks reveals an amazing amount of bio mass hiding under the cool flowing waters of the Lower Owens, Reading the water is key here as usual as we dip our nymphs down deep to pass them within sight of holding trout. Peridons, Midges, and lots of Caddis have been patterns replicating what is on the trout’s menu recently. As the water drops and nights turn cooler the Lower Owens will become a fly anglers paradise for those in search of the wild and beautiful Brown and Rainbow Trout she holds. 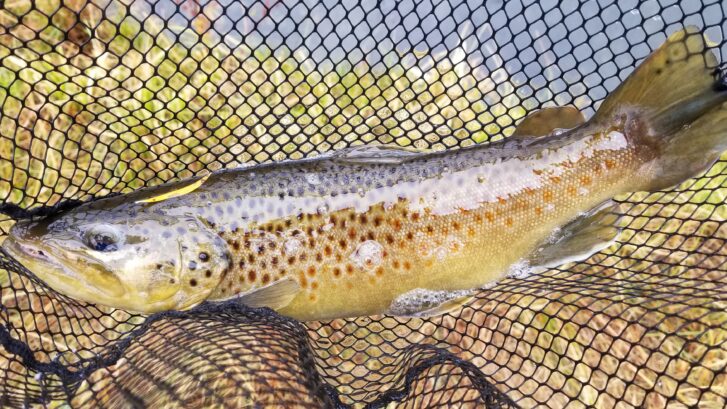 The legendary waters of the East Walker River which flow right outside of Bridgeport, CA are running at a healthy flow of around 150cfs. The only problem is that the water temperature still touches the low 70’s during the brightest parts of the day. This problem should eliminate itself soon! The positive news here is the tepid water will follow the cooler weather and drop its temperature by quite a few points in the weeks coming. We hope the flows will continue to surge near these levels to help the fish get as big and healthy as possible before winter season hits. Stay tuned for more from the once fabulous East Walker River! 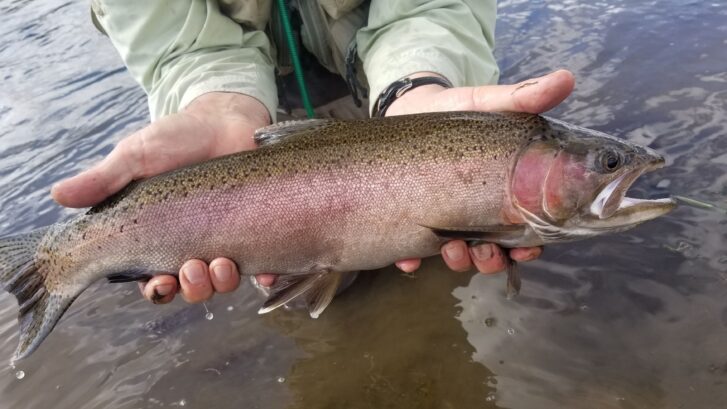 The Upper Owens River continues running at a low flow of around 58cfs. Nothing super excitingly new to report here except the fact that the nights are much cooler and soon we will be able to cast our hand tied flies into a hole with the possibility of hooking into a trout that will completely test every fly fishing skill you have. These trout could also possibly be the largest freshwater fish you will hook in your life! For the last few years we have experienced the presence of some very large Crowley trout; Rainbows, Browns, and Lahonton Cutthroat trout will all be making their way up the river to spend the winter season in the amazing and scenic waters of the Upper Owens making nothing short of a fly fishing paradise for us fly anglers. For now, the river is still worth fishing as we get reports from personal experience, and through the shop of random large fish who have decided to take up residence in the Upper O all year long!

Call the STM Fly Shop in Bishop for more details or to book a trip on this unique opportunity. 760 873 0010 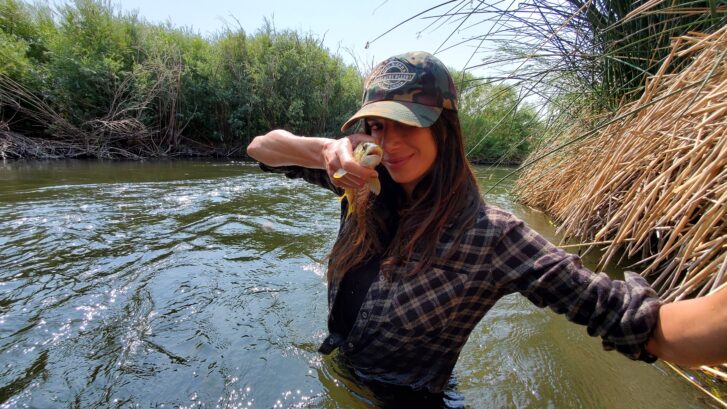 The California jewel of a wild brown trout stream, the Lower Owens river, flowing just outside of Bishop, California is still in great condition! Yes,it is hot out, but the river has maintained a fishy and cool temperature of around the low 60’s with a perfect flow of 223 cfs. Euro nymphing, as well as the good old indicator have been very successful in hooking and extracting wild trout from the Lower O. Starting early and ending early is the key. Standing in the river without waders is divine as we are some of the most comfortable and cool people in Bishop while the heat sets in around us as the day warms up. Small pods of rising fish can be found in the morning and evening times throughout the system. Small Mayflies, Midges, and Caddis are on the menu during these times. Stomach samples have revealed some smaller specimens being eaten recently. Keep your dropper fly around a size #18-20 for now.

Call or text the STM Fly Shop in Bishop California @661 364 6981 for more details or to book a guided fishing trip.

The Upper Owens is showing 60cfs (cubic feet/second) of water flow on LADWP’s website. Fishing has been going along very consistently on the Upper Owens just outside of Mammoth Lakes. Small top-water bugs can be found early in the day and with many Midges, Caddis and Mayflies tapping the surface of the water provoking a decent response from the resident trout of the Upper. These small aquatic insects seem to be in the #16-20 size range and a variety of patterns presented correctly will work. Don’t expect the bigger fish to give you much attention while fishing these small dries, you will have to nymph or pull a streamer for that until the hopper season arrives. We are keeping out fingers crossed the hoppers have not got burnt out this year! Standard nymphs such as; Peridons, Pheasant Tails, Midge Pupae patterns and Caddis Worms will all take fish when you sink them deep in the dark holes. Streamers? yes but fish them a bit smaller than winter time and cover a lot of water. Most wooly buggers and rabbit type streamers in a #8-12 will work fine for this type of fishing. Stay tuned for a possible hopper season. Last year the fish put on a good share of their yearly bulk while feasting on these jumpy creatures. 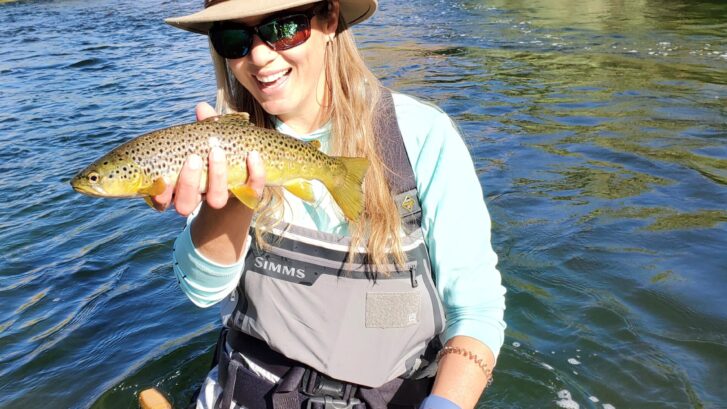 The Lower Owens River, flowing just outside Bishop, CA. could of possibly already seen its highest flows of the year at only 375cfs! Flows are now at a beautiful 300cfs of clear sierra water in its finest condition. Wading at these levels requires knowledge of the river and a little trust in your step. Overall wading is easy and very refreshing on these hot summer days. Trout are feeding randomly on the surface throughout the Owens River system throughout the day, but can be a stronger emergence in the cooler moments. A stomach pump yesterday once again proved small varieties of mayflies, caddis and midges are still on the menu for the wild trout of the river, Bigtime! Oh, and lets not forget some small stonefly adults and nymphs as well! The water is in the mid 50’s with flows very clear up high and a small stain in the water a few miles down below. Overall the river is in amazing condition! Give us a call or text @661 364 6981 for more details on this amazing fishery or to book a guided fly fishing trip! 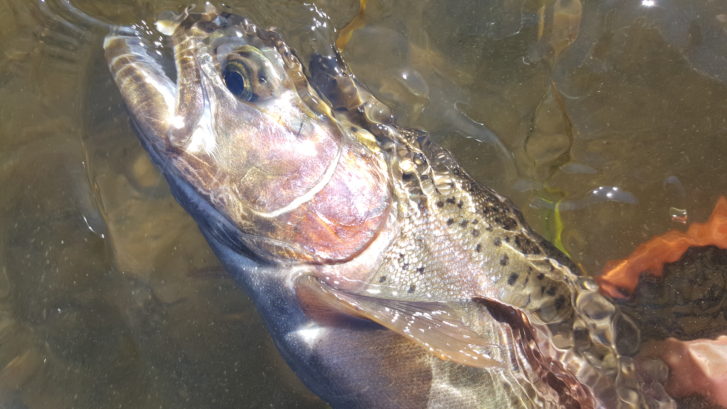 The Upper Owens River, right below Mammoth Lakes, California is flowing at a low flow of around 55cfs of cool sierra water. The fishing is spread out and generally very good throughout the river system, no one place is necessarily better than the other. The big fish we all get giggly over are now completely spread throughout the system, and a bit harder to catch, some up higher, some hiding for most of the day. These large slabs of meat get harder to catch as the water lowers and flows become skinnier, though not impossible. Large attractor patterns under the water have been taking these guys with success. The resident fish are spread throughout the system and can be taken on larger and smaller bug imitations. We have not seen the LHCs run into the river quite yet, and they might not this year in the number we have seen in the past. HOPPERS! This is what we are anxiously awaiting as the river comes alive and the fish put on good amounts of body mass for the season on the Hoppers alone. 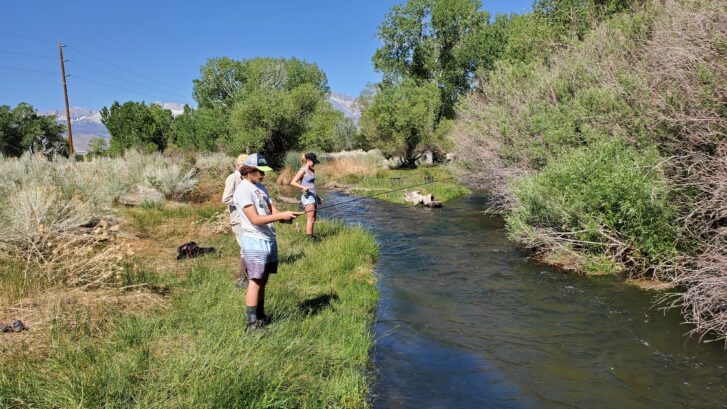 The Local area creeks are in great shape right now! Runoff has not brought water levels to unfishable status and remains very fish worthy. We are not exactly sure what runoff is going to do to us this year. It will depend on temperatures that melt the snow, and how much rain and storms arrive here in the next month. The fish are ready to eat at this time! Small dries, Nymphs and Streamers will take fish very successfully. Small single nymph rigs have been absolutely successful with some very aggressive attacks. Small streamers such as Wooly Buggers, Muddler Minnows, and the like will all take fish. C